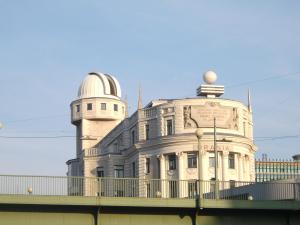 In September 2016 the ISBN community took part in the 2016 Annual General Meeting of the International ISBN Agency, which was held in Vienna, Austria. The setting for the meeting was the fabulous Urania Sternwarte building - an observatory in central Vienna. We would like to pay special thanks to the hosts of the 2016 meeting, Hauptverband des Österreichischen Buchhandels (HvB), which runs the Austria ISBN Agency.

The meeting was a resounding success and attracted an impressive 82 delegates from across the ISBN community. We would also like to thank the representatives of the International ISMN Agency for their help in the arrangements for the meeting. For several years the AGMs of the International Agencies for the ISBN and ISMN standards have been held in collaboration with one another, an arrangement which we feel serves delegates well.

The 2016 meeting featured important topics about the current revision to the ISBN standard and the ISBN Users' Manual, as well as updates on the Austria Book Market and a session about ISBN and the Law.

An article on the meeting appeared in the October 2016 of the "Anzeiger" publication, the trade magazine of HvB. Please click here to view the article (in German).