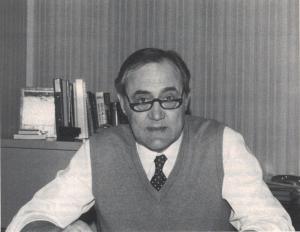 David Whitaker OBE, one of the key pioneers of ISBN, dies

The International ISBN Agency is very sad to inform the community that David Whitaker, one of the foremost early champions of book numbering, has died.

Based in London, UK, he worked with his father Haddon in the family firm from the 1950s. The family firm was J. Whitaker and Sons Ltd  - at that time prominent as the publisher of The Bookseller magazine and of the famous Almanack, as well as for producing lists of forthcoming books in the UK and for developing new services to assist the book supply chain.

David Whitaker became one of the key players in the establishment of standard book numbering (SBN)  - the precursor to the ISBN. In the 1960s publishing and bookselling was very different with manually intensive processes and WH Smith's plan to introduce a computerised warehouse was a revolutionary moment. WH Smith commissioned Professor Gordon Foster, who was then chair of computational studies at London School of Economics, to produce a report on, and devise a system for, book numbering. David was ideally placed to propose that J Whitaker and Sons should embed the book number in their forthcoming book lists so making the SBN "as much a part of the book as the name of the author and title".

The SBN was introduced in the UK in 1967 and enjoyed early success with David ensuring that J Whitaker and Sons established the first operational SBN Agency in the world. The system was also quickly adopted in the US, with early interest from Netherlands, Australia, New Zealand, South Africa and Germany among others. David helped to prepare the way for international standardisation and was the Chairman of the first ISO Working Group. The text was finalised in a little over two years and ISO 2108 (the ISBN Standard) was published in 1972. Further improvements and developments flowed from the introduction of ISBN  -  TeleOrdering, improved book sales monitoring, the refinement and expansion of metadata and more.

As one of the first to realise the potential and benefits from a book numbering system, and advocating the need for an identifier for books, he became crucial to ISBN's success and ubiquity across the world's book supply chain. While it is hard to imagine a supply chain without the ISBN now, had it not been for his early support and forceful ability to persuade and mobilise other early influencers, things perhaps might have been very different.

Aside from his involvement in ISBN, he was also editor of The Bookseller between 1977 and 1979 and Chairman of J Whitaker and Sons until he retired in 1997. David was made Officer of the British Empire (OBE) in the Queen's Birthday honours in 1991.

The book world owes David Whitaker a tremendous debt. He played a key role in the development and standardisation of the ISBN, bringing together the library and book trade worlds but always understanding that the book supply chain requirements would drive the adoption of ISBN. The ISBN enabled barcoding of books, electronic ordering, exchange of metadata and compilation of sales data, making the industry more efficient and facilitating the flow of information.

David was an enthusiastic supporter of the UK and international book trade standards organisations BIC and EDItEUR and played a central role in gaining the support of leading trade figures for those organisations.

David was famously opinionated but always ready to listen to both sides of an argument. He was a mentor, a reliable colleague and a gentleman. He will be greatly missed.