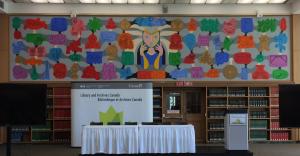 Well over 50 delegates were present for the meeting, which featured topics such as the latest ISBN developments, the revision of the ISBN standard, and a great talk by Noah Genner on the Canadian book market, as well as the formal part of the AGM.

The community also had the opportunity to look around the wonderful Gatineau Preservation Centre, a purpose built facility for storage of important treasures of Canada's heritage.