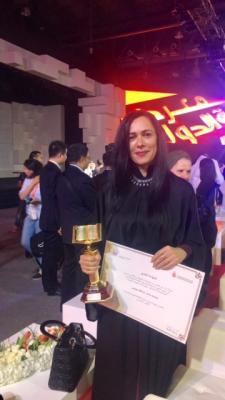 We would like to congratulate Ms Basema Younes on her recent award for the Best Emirati Book by an Emirati Creative Writer, which was presented to her in early November. Part of the 35th Sharjah International Book Fair (SIBF) Awards, it is presented to the author of the best book from any of the following areas – poetry, novel, short story, or drama.  Sheikh Dr Sultan Bin Muhammad Al Qasimi, who is himself an author, is patron of the awards which highlight contributions to literary culture in the Emirates. Ms Younes’s winning book called “Until the End of the Month” is published by the Emirati Writers Union and hopefully will be available in translated versions soon. Basema is the Cultural Adviser at the Ministry of Culture, Youth and Community Development of the UAE, the organisation which also operates the ISBN Agency of UAE and she attended our AGM in Vienna this year. She has previously published several collections of short stories, novels and a play.