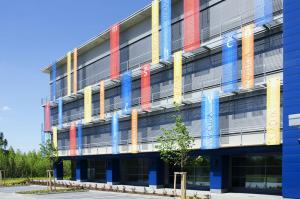 From March 24, 2014 the Czech National ISBN Agency (Národní agentura ISBN v ČR) moved into new premises in a suburb of Prague. After its very beginning on January 1, 1989 the Agency was seated in the National Library of the Czech Republic in Klementinum in the centre of Prague.

Revitalization of the Klementinum is a long-time task which should be finished in 2016. The director general, manuscripts and rare books, music department. Library Institute, Slavonic Library and some other units will remain at the Klementinum. In the new depository is the real core of the library, i.e. the line of processing both of domestic and foreign documents, Czech National ISBN and ISMN agencies, both acquisitions, name and subject descriptions, authority file, special documents and the union catalogue.

Whilst there are troubles connected with communication with the Klementinum, which is about 15 km away, our Czech Republic ISBN Agency continues to work very reliably in the new building. More photos of the building can be seen by clicking here.

(We thank Antonín Jeřábek of the National Library of the Czech Republic for providing the content for this news story.)